This story has originally appeared on https://typhoonnetwork.medium.com/on-sonar-whalespring-matthew-albright-and-getting-300-000-stolen-our-side-of-the-story-fe89ff100f67

On 8th of May, our strategic partner WhaleSpring/Sonar, more specifically the person in charge Matthew Albright, made the decision to market-sell 2,000,000 TYPH tokens (resulting in actual $200,000 USD out of $560,000 USD worth) we have allocated to them as part of our partnership deal, crashing the TYPH token price and damaging investor trust. 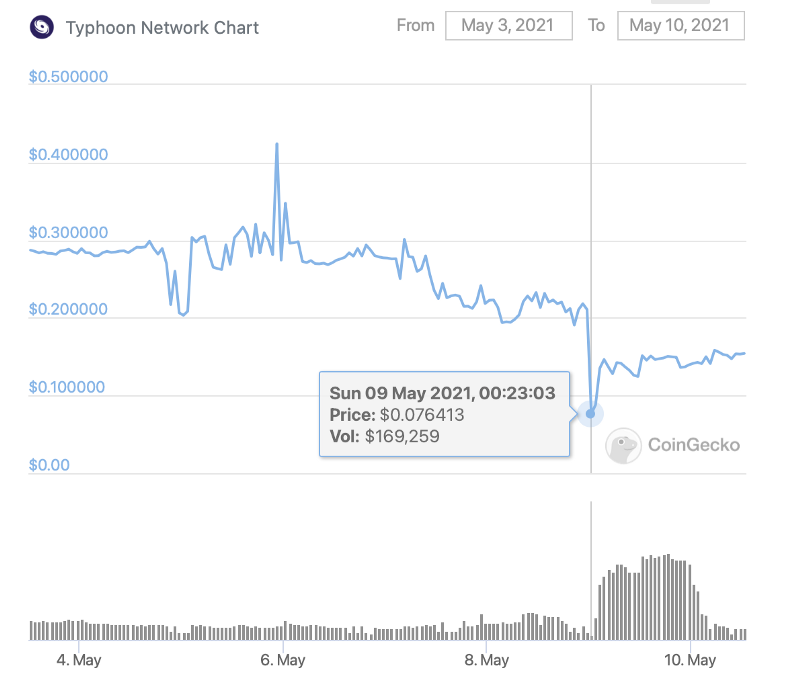 We have not received information about this beforehand and no attempt to discuss any ongoing problems has been made prior. The full worth of the tokens at the time of selling was 0.28 * 2m = $560,000 USD, the resulting $200,000 USD due to the market sell have been justified with 19 days worth of marketing done by Sonar.

Further, our shared marketing discord with Sonar got removed overnight and an attempt to use our private chat resulted in core Sonar people, namely Matthew and Jared, leaving the group.

This post is to give an overview from our side on what happened, possible explanations, and warnings to not repeat our mistakes.

Typhoon Network is a privacy centric project on Binance Smart Chain that enables users to send private/anonymous transactions between wallets.

In April we, Typhoon Network, signed a strategic partnership with Sonar/WhaleSpring. This was a very involved deal that meant for Sonar to become our marketing arm and partner for the long-term.

2m tokens ($712,000 USD in value by then) were transacted to them, to be used for marketing campaigns, salaries, but also to be sold off in steps to pay for exchange listings, the first of which was our listing at CoinTiger.

The big question: Why did we not do a vesting contract?

This is the question we have been getting since early on, and I agree that we should have.

The justification for not doing a vesting contract was that Sonar wanted to sell the tokens privately to their group of investors to finance exchange listings on the way, leading up to a bigger listing like KuCoin (which they claimed to be in contact with), which is a valid reason and made sense to us back then.

We have asked them last week to add a vesting contract (which could have prevented this incident) after the fact, but they refused with the same reason (details below).

Sonar presented us with a marketing plan outline that involved

Payment for this deal was to be covered by the 2m tokens we have allocated to them, and tokens were to be sold solely for these purposes, or whenever TYPH hit a $1 target.

Sonar was to be in charge of marketing, listings and everything related to it, while the Typhoon team focuses on product development and new features.

Events and actions leading up to the incident 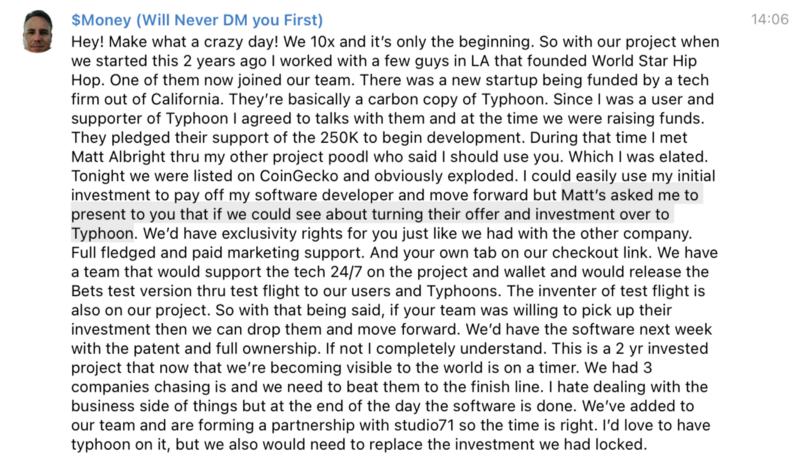 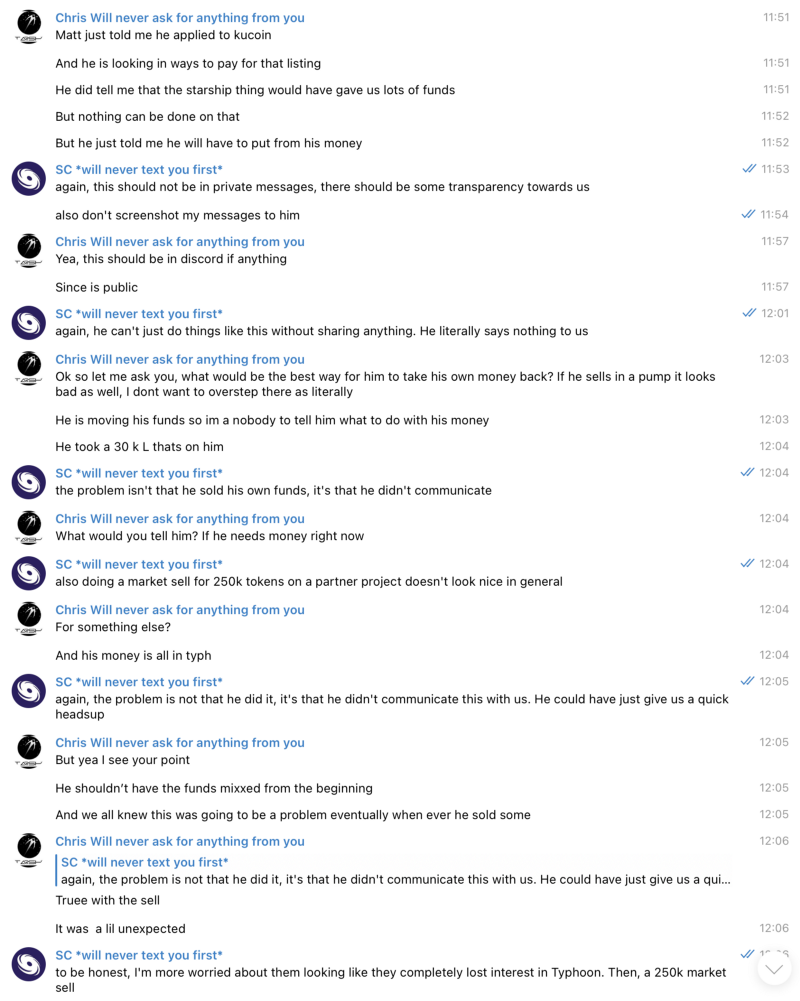 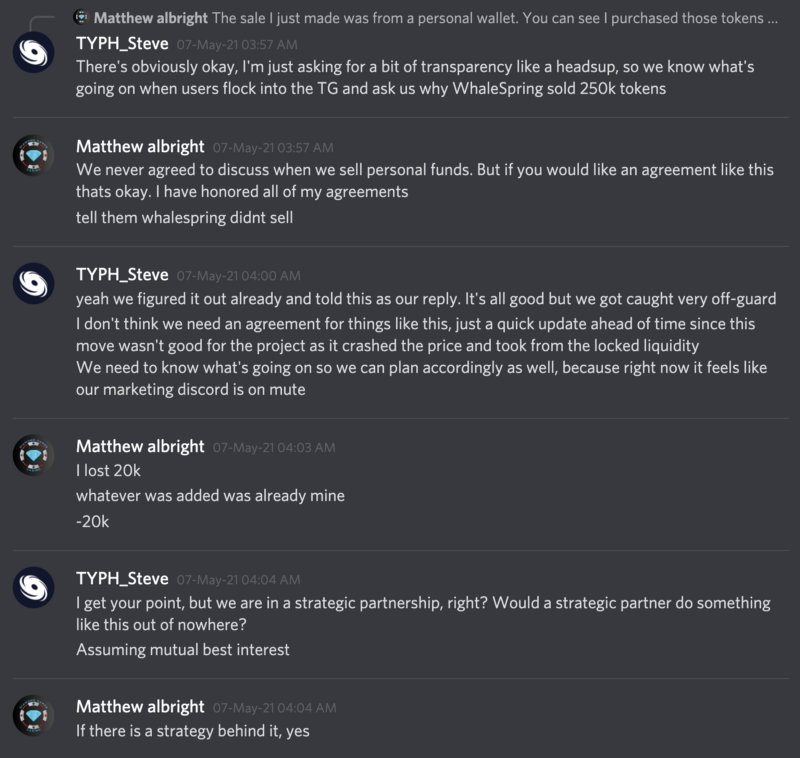 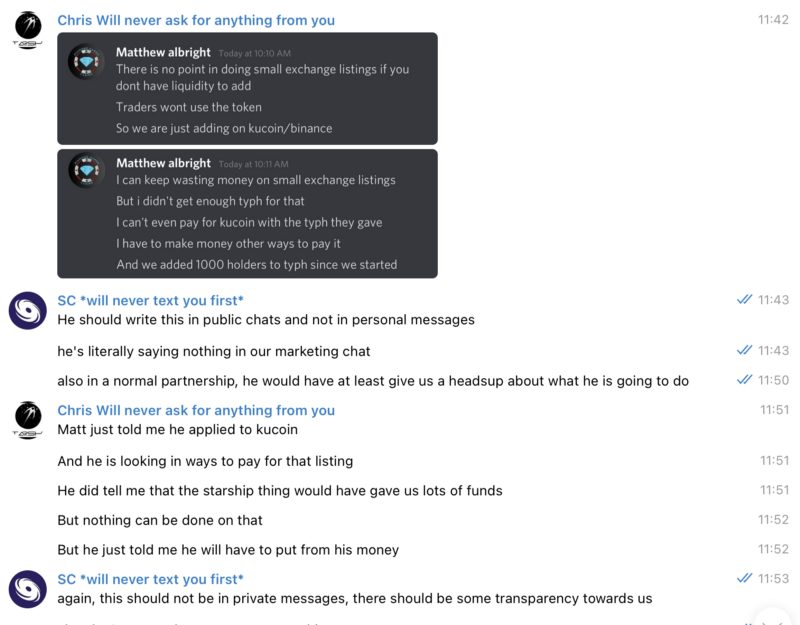 On 5/9, after waking up, we noticed that our shared discord has been deleted. The Viral Investments discord spotted this message from Jared Lutz with claims that we have removed 450k worth of liquidity, and diluted the circulating supply of TYPH. 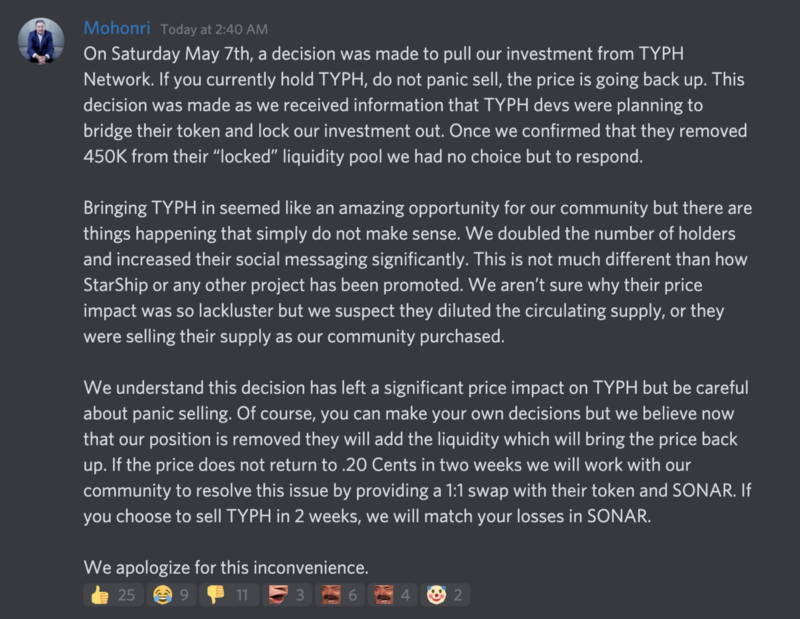 This happened while WhaleSpring/Sonar was fully aware that our team is sleeping and not operating as we’re in a different timezone. There was a “You guys available for a call?” before the sell went down which might have been a check to see if we were still awake (but this isn’t more than a guess and proof-less accusation, although since according to their post they made the decision to stop Typhoon on 5/7 already, it’s a valid suspicion).

No evidence has been put forward that liquidity or tokens have been moved from Typhoon. It would not make sense for us to pull 450k worth of liquidity as this would only harm the project and users as a whole without any benefits for any party involved.

The impulsive actions of Matthew Albright and Sonar, namely the sell of 250,000 of their partners tokens (personal or not) on market without prior notice, inactivity and ignoring of our messages, not communicating changes in plans with exchange listings, not proceeding with the video from Mikuji, and denying a vesting contract to keep the tokens unlocked (which would have prevented the events), resulted in the Typhoon team to get worried about Sonars agenda and potentially harmful intents towards us.

After the events, the team discussed internally potential actions we could take if the harmful actions of Sonar continued, some of which were asking to change contract conditions, offering them a full buyout to exit the agreement or even restarting Typhoon with a new token and rebrand completely. This discussion happened in our team telegram only at one point in time, during the period after the 250,000 token selloff when we weren’t able to reach Sonar members for an explanation while Matthew was still writing messages publicly on his private discord but not to us. This caused us to believe that they have thrown us under the bus and are going to sell the rest of the tokens.

As these discussions happened purely internal and only at that point, with no conclusion taken as contact has been re-established and the selloff explained by Matthew, we have since learned that our on-payroll community manager Chris Velez has been privately relaying information related to this incident (potentially out of context) to Matthew Albright, including our internal emergency discussion to ongoing events.

We believe this is the part that they included in their message about us trying to “lock their investment out”, which still does not make much sense as they had no investment in TYPH after Matthew sold his 250,000 stake. If this was truly triggered by our internal telegram conversation, we have further reason to believe that the intend to sell the 2m TYPH tokens was already long planned, as it explains the refusal to vest, inactivity towards us, stopping of spending on listings and other evidence-less accusations such as us removing liquidity or diluting the tokens leading up to the event.

After the tokens have been sold by Matthew Albright, Sonar netted a profit of around $200,000 USD (from tokens worth $500,000 by the time) solely provided through the tokens we have allocated to them, while harming TYPH investors and the market, including their own community. Under no circumstance can these actions be justified with reasons put out by Sonar. A far more reasonable termination would be to subtract cost for the 19 days worth of marketing and part in good faith. Instead, walking away with $200,000 while claiming it as their investment isn’t more than theft in our eyes, that paints Matthew Albright / Sonar as hostile entities, and we advise caution when dealing with them.

Attempts to bring this up in their community (that also got hurt from this) have been shut down with accusations of us having an agenda to cause FUD or just promote our group.

Proof of him moving the resulting funds (including dollar values):

Our ex-community manager Chris Velez has since further extended his hostility towards Typhoon Network post-incident, by abusing his admin privileges in our international groups (that he helped establish and pay for) to pin a link to StarShip. 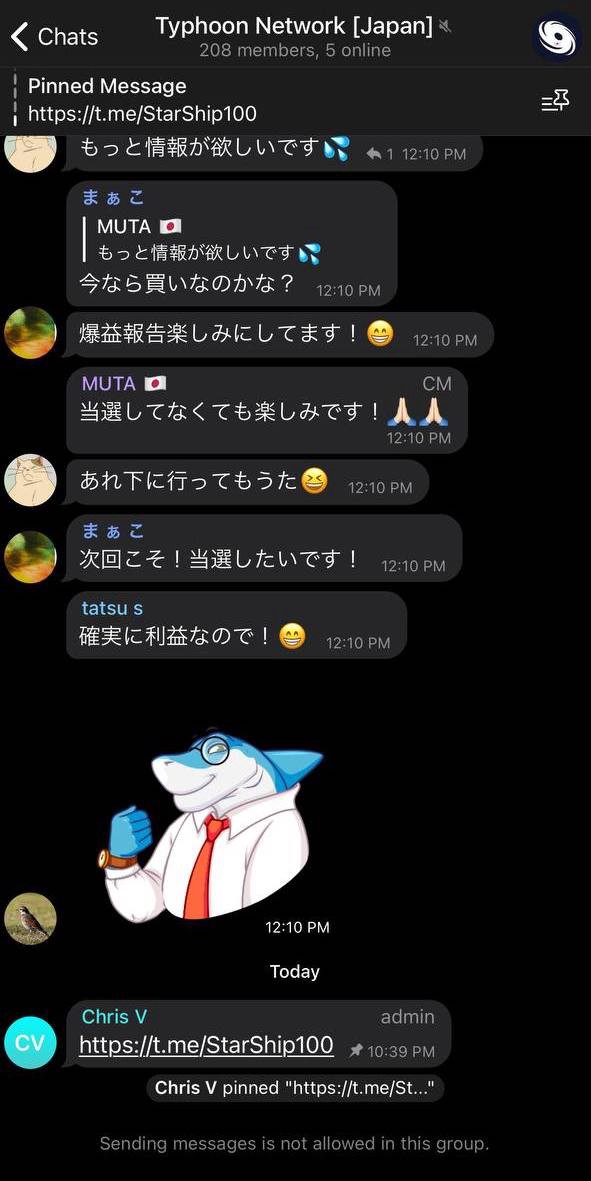 There is not much we can do to undo this, so all that is left is to learn from mistakes and share our experiences, and there are many. The most important being to never transmit a bigger amount of tokens without a vest, ever. No matter what happens, people can always stab you in the back and there isn’t much you can do about it in crypto, rather trust Smart Contracts over peoples words. Always back-up everything and have a trail of information. We were lucky enough to have everything auto-backupped, otherwise we would have not been able to provide screenshot evidence.

Are we at fault for discussing internally about Sonars behavior and potential actions, when we were put into a situation that caused us to panic? Given the above timeline, we believe we haven’t acted in bad faith or hostile towards them.

We have since contacted the local US police department in the state of Sonar employees mentioned and submitted a report to the FBI cybercrime and fraud division with a compilation of all information, evidence, transaction histories and screenshots we accumulated and extracted from discord and telegram.

This is a very bad situation to be in, and we’re very sorry for anyone that got hurt because of this. We’ll try our best to leave this behind, focus on what we can do best and make Typhoon a great product. Let’s hope this will just be a blip in the overall picture.

Find Typhoon Network around the internet